Plus Partners With Velociti To Install PlusDrive On Existing Truck Tractors

Self-driving truck developer Plus announced today that it has selected Velociti as the deployment and maintenance partner for its national Plus Build program. (Disclosure: I am an Advisor to Plus.) 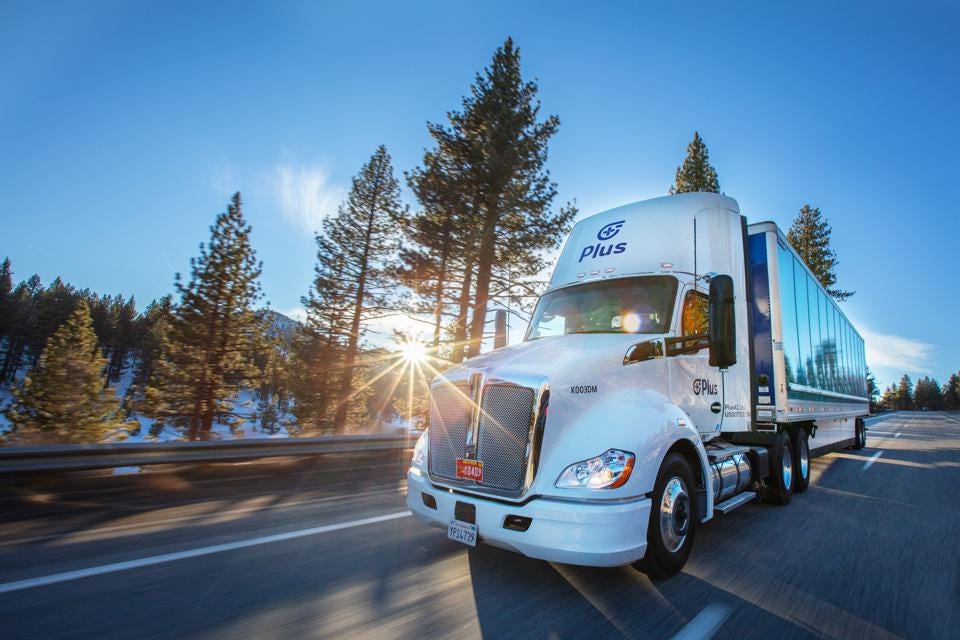 Plus Build represents the process by which Plus equips a customer’s regular Class 8 truck tractors with sensors and software designed for SAE Level 4 autonomous driving. The system is supervised by a driver employed by the trucking fleet. The resulting product is called PlusDrive.

PlusDrive performs the following functions in normal traffic conditions on a limited-access highway:

· Adaptive cruise control (down to zero)

The driver’s attention to the road is continuously monitored to ensure active supervision is occurring. The driver can disengage the system at any time and take over driving. For the SAE Automation Level geeks out there, PlusDrive incorporates a Level 4 intent system operated with a driver in the loop; thus it operates at Level 2.

According to Plus, “PlusDrive improves safety, enhances driver comfort, and saves at least 10% in fuel costs.” The 10% improvement in fuel economy has been documented by other truck AV developers and their fleet customers, notably by a UPS representative at the AUVSI Automated Goods Movement workshop last month, who referred to their work with TuSimple. While there may be some unique techniques from some developers, the benefit appears to stem mainly from removing the variability in driving style that is inevitable with human drivers. Even a highly experienced truck driver may be impatient or tired on a particular run, operating in ways that are not ideal for fuel economy but might get them home sooner. An automated truck is always operating the vehicle for maximum fuel economy within its current operating environment and safety protocols.

Less Than A Day To Near-Autonomy

Plus Build installations are performed near major transportation hubs across the U.S. to sync up with where their customer trucks are. Plus says it takes less than a day to turn new and existing Class 8 trucks into semi-autonomous trucks by equipping them with lidar, radar, and camera sensors and Plus’s autonomous driving software. PlusDrive can be integrated with existing or newly built trucks.

What about maintenance of such a high-tech system? Plus says maintenance services are available nationwide by utilizing mobile resources. Plus is also implementing Velociti’s VeloCare solution, a proactive system-health monitoring program including remote and mobile services to maximize technology uptime.

Shawn Kerrigan, COO and Co-founder of Plus, said: “Plus Build helps companies unlock the benefits of autonomous driving technology today by quickly modernizing trucks to improve their safety and uptime. Velociti’s unmatched technology installation and service network will help us get PlusDrive into the hands of more truck drivers across the country to make their jobs safer, easier, and better.” 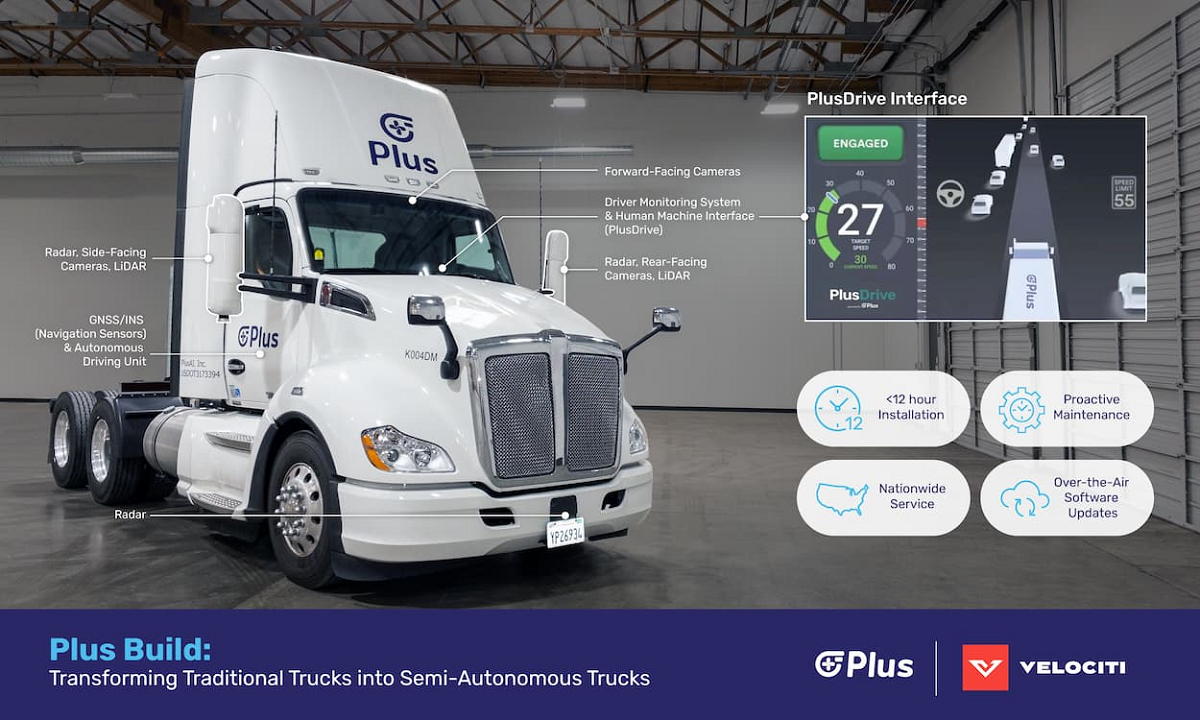 “Partnering with Plus to provide our services as an important part of the PlusDrive solution leverages Velociti’s decades of experience deploying and maintaining innovative fleet technologies. We are excited to enter into this strategic partnership to help PlusDrive customers realize the benefits this transformational technology brings to their businesses and to the transportation industry,” said Ryan Powell, Senior Vice President at Velociti.

A New Level Of Real-World Exposure

Installation and delivery of PlusDrive started for customers like AmazonAMZN +2.5% in early 2021 and is significantly ramping up this year. Plus says that large fleets and truck manufacturers are already participating in Plus Build and are operating PlusDrive-enabled trucks on the road today.

Plus frames their approach as “pursuing an evolutionary path” to get to Level 4 commercial deployment. By making PlusDrive available now, Plus contends they are helping fleets with driver retention and fuel savings, while collecting billions of real-world miles to prove that its L4 technology is safer than human drivers.

Exposing an automated driving system to the real world is a key part of system validation, along with extensive simulation and other techniques. Different functional safety experts will have different opinions on the optimum approach. But with PlusDrive in the game, the degree of real-world exposure that is possible is pretty mind-boggling. If only 100 PlusDrive trucks are averaging the 100,000 miles annually that is typical in the business, they will log 10 million miles in a single year. So, as Plus Build installations ramp up, we’re talking about very substantial exposure levels. This approach to commercialization of driverless trucks aims to increase the resiliency and trustworthiness of the eventual Level 4 product.

PlusDrive equipped trucks are adding to the steadily increasing numbers of driverless and driverless-intent vehicles on our roads. While this uptick may not be noticeable to the average motorist, it is another indication of the steady advancement of autonomy in road freight movement.

Originally appeared in Forbes. Written by Richard Bishop, May 9, 2022.

Don't Forget Your Technology When Looking At Preventative Maintenance

Now What? All Of That Technology Requires Maintenance

COVID-19 forced an acceleration of technology purchases. Operational support for the hospitality industry is increasingly demanded by a tech-driven world

Velociti and Merlin Solar have partnered to offer fleets a cost-effective solution to add solar panels to their assets in order to encourage broad adoption of the practice.

How Trucking's Adoption of Telematics Has Forever Changed Fleet Management

New developments in fleet monitoring and telecommunications during the past few decades have significantly altered how fleets track and manage their drivers and mobile assets.

Stay Connected With The Latest

Check out our style guide to download our logo